Positive In, Positive Out

Music, movies, books and websites that uplift and educate

Your future is created by your daily habits and how you feel day to day.
Every choice you make is either going towards where
you want to be or away from it.

Ideas on how to stay positive daily:
• Limit world and local news to 30 minutes a day
• Listen to music that makes you feel good
• Watch movies that put a smile on your face
• Help others each day
• Hang out with positive people…and that includes social media friends!
• Exercise and eat healthy
+ Laugh a lot!

Corrine’s favorite positive tunes
1. I am Light by India Arie
2. Out of My Hands by Jason Mraz
3. Living in the Moment by Jason Mraz
4. In the Sun Coldplay and Michael Stipe
5. The Rainbow Connection by Willie Nelson
(or Kermit the Frog’s version if you like Frog voices)
6. Beautiful Day by Joshua Radin
and Sheryl Crow
7. I Wish I Knew How It Would Feel to Be Free
by Lighthouse Family
8. Over and Over
by The Goo Goo Dolls
9. Never Give Up
by Sia
10. There is so much magnificence
by Steve Gold

Healthy Lifestyle Books
• Clean
by Dr Alejandro Junger MD
Great explanation of how the sludge in our diet slows the body down and affects how we function.
• Womens Bodies, Womens Wisdom
by Dr Christiane Northrup MD
A great book on nutrition, hormones, lifestyle
• Perfect Health
by Deepak Chopra
A simple introduction to ayurveda

Holistic Websites
www.dreddikenny.ca
Check out the health blog link. Great recipes and more!  Dr. Eddi is one of Corrine’s closest friends and a wonderful Naturopath. 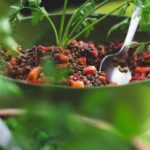 The Chopra Center Dhal is a coveted recipe and very hard to track down these days. But guess what? Here it is!

Interview with Corrine by Julia Griffin

Julia: Can you begin by telling about your work with mantras and
where it has taken you in your life?

Corrine: I’ve always loved music, and I started singing
professionally at seventeen. I went to Nashville because I wanted
to be a star. I started meditating because I had a really bad
stomach ulcer. Very soon after that, the ulcer went completely
away. I was so impressed that I took yoga classes to study
mantras.
Meditation with mantras caused me to focus on my inner life as
opposed to my outer life. I realized it was only my ego that wanted
to be a star. What I really wanted was to use my voice to heal and
help others. I stopped singing completely for several years, to
keep my ego in check. I started using my voice as a tool to serve
God.
I took a meditation class with Deepak Chopra, and he found out
that I could sing (I tried to hide it, but he found out). He asked me
to sing for him, and I’ve worked for the past five years teaching
yoga and mantras and singing at seminars at his institute in San
Diego. I also write chants now, and even if I just sing a pop song,
the spirituality is still there. My intent is to serve.

Julia: What is a mantra?

Corrine: Mantra is a Sanskrit word. The mantras come from the
Vedas and were written 5,000 years ago. The Vedas are thought
to be much older, having been given to us 25,000 years ago. It is
believed that Enlightened Beings wrote the Vedas, and these are
the source of mantras.
“Man” means mind and “tra” means instrument or tool, so
“mantra” literally means instrument of the mind. Mantra Yoga
means “union by voice or sound,” and refers to the rhythmic
repetition of mantras. Mantras are tools for focusing — a taxicab
to take you where you want to go. When the mind is focused on a
mantra, it becomes quiet, and this takes us to the soul.
Eventually, the sound merges with God, and only the meditation
or fixation of the mind remains. This is the way in which the
mantra is used as an instrument of the mind. Read Complete Interview here